Starting on May 1st 2017, commissions for all app and in-app content will be reduced from 7% to 2.5% globally.
Screenshot via @drbarnard on Twitter

Apple is reducing commissions paid to sites who promote our apps by 64%! That's a huge cut and they're only giving everyone involved 7 days notice.

The app economy has been tanking for the last few years. Apple must know this by now, even though they tout how great it is (maybe it is for a few big companies such as Niantic Labs, Nintendo etc). Personally I think this change in commission rate must be part of something larger, aimed to help rejuvenate the ailing app economy.

Back in June, 2016, Apple announced the first change in the percentage developers pay Apple, dropping the 30% rate to 15% but only for those using subscriptions, and only after a customer has been a subscriber for at least a year. For the most part, this would only have helped a few developers so far, since only a limited number of developers were even allowed to use subscriptions until the June changes. Those would be the Netflix/HBO type apps that are worth billions and don't need the extra help.

What I'd like to see at WWDC this year, is for Apple to announce they are finally reducing the 30% rate we pay to something more reasonable. Let's say 15%?

Assuming that's the plan, how about this as a proposed alternative? Instead of dropping the rate to 15% across the board, Apple could drop the rate to 15% for apps installed organically, and 20% for apps installed through an affiliate link. That extra 5% could then be paid to the affiliate who earned the sale. As a developer, I'm fine with that since it only helps those who help me.

I feel this would be a win-win for all involved. Developers get a much needed drop in their commission rate. Promotion sites such as iMore, touchArcade, etc will get a small bump instead of a drastic cut in their earnings, and Apple gets to keep the new 2.5% affiliate commission rate. I know dropping the developer rate isn't ideal for Apple, but it would make a big difference for the people who help keep their devices in demand.

What do you think about this proposal? Please @ me on Twitter and let me know your thoughts.

With the recent announcement of some App Store changes, and WWDC just days away, I figured I’d better write about an idea I had before it’s too late. I’ll keep this much shorter than the version that’s been floating around in my head.

I would suggest that Apple release their grip on the App Store, and start allowing other stores on iOS/tvOS which would, essentially create an App Mall. Open it up so that anyone can create a store. These will be distinct apps developed like any other third party app, clearly branded to avoid user confusion with Apple’s App Store. I envision stores created by brands you already know: TouchArcade, 148Apps, AppShopper, Google, Microsoft, Panic, OmniFocus, RelayFM (for sponsored apps) etc; as well as new ones that will appear.

These stores would be akin to radio stations. If a person likes Rock and Roll, they tune in to a Rock and Roll station. If they prefer Jazz, they listen to a Jazz station. Every once in a while you listen to something different. We’ll have stores that focus on pro apps, stores for games, a store for writers, developers, parents etc. Users will come to know and trust the curators of their favourite stores. This plan delegates some of the curation of apps out to the community where it can be handled much better (just because of sheer numbers). It doesn’t take away from Apple’s App Store curation, rather it enables a method to better group apps and aid with app discovery. Instead of trying to fit 2+ million apps into 25 categories, there will be another layer on top to help sort.

One huge side effect to this plan is that Apple would have more control over it’s own App Store. They will be able to delist a tonne of bad apps, and stop adding new bad apps by raising the criteria that allows apps to be listed in the official App Store. If an app is ugly as sin, riddled with spelling errors, etc, they can refuse to include it in their store, just as Saks Fifth Avenue can refuse to stock substandard products. Right now, Apple has a set of rules, and if your app follows those rules it should be allowed in the store. Ugly apps should never be featured anyway, but they still come up and clutter the search results, they still show up in the “Customers Also Bought” section. With my new plan, those apps won’t show up at all. It’s my belief that Apple has to generally accept any app that follows their rules, or else they’ll start to run afoul of anti-competition laws. Since there is no other way to sell apps to users with iOS/tvOS devices than through the Apple App Store, if they reject apps based on religious beliefs, politics, bad UI, etc, they are preventing other companies from operating, and could get into trouble.

It would sort of be like Panasonic selling a radio, and then saying no Justin Bieber songs can be played on them. How long would it be before Panasonic was dragged into court by the Department of Justice? So my point here is that because Apple would be allowing developers to list their apps in other stores, they’ll be free to be more selective in their own store.

None of this affects app review, signing, pricing or privacy BTW. All apps would still go through review (though it would be more for weeding out malware or buggy software). Apps would still be signed by the developers and installed from Apple’s servers. Just as the TestFlight app can install apps that aren’t in the App Store, third party stores would also be able to use an API to trigger app installs (securely of course, apps wouldn’t be able to install other apps without the user’s explicit permission). The price of an app would be the same, and the payment would still be handled by Apple. So privacy is preserved as Apple would still be the only one to know who the customer is. Apple could still take their 30% (or now 15% in some cases, hopefully more cases soon). The third party store developer would be compensated via the already existing affiliate program. Or depending on the store, they may charge the developer for a listing, just as grocery stores charge food producers for the valuable space on the end of the aisle.

The goal of this idea is to help with app discovery. By opening up the App Store in this way, it empowers the developers in our community to help solve this major problem that’s really hurting the platform, without compromising the security or privacy of the platform that users have come to expect.

Today, StackSocial launched the Essential Dev Tools Bundle for $49.99 USD. For the first time, developers can purchase Watchdog for Xcode outside of the Mac App Store. If you're a developer and you haven't purchased Watchdog yet, now is a great time. The version included in the bundle is not sandboxed which eliminates the hassle of having to grant Watchdog permission to access your drives. This is a major benefit to those of you using a RAM disk because with sandboxing you have to re-grant permission every time the RAM disk changes on reboots, remounts, etc. In addition to getting this amazing, non-sandboxed version of Watchdog for Xcode you'll be getting 7 other fantastic apps that will surely make you life as a developer much easier. Check them out below: 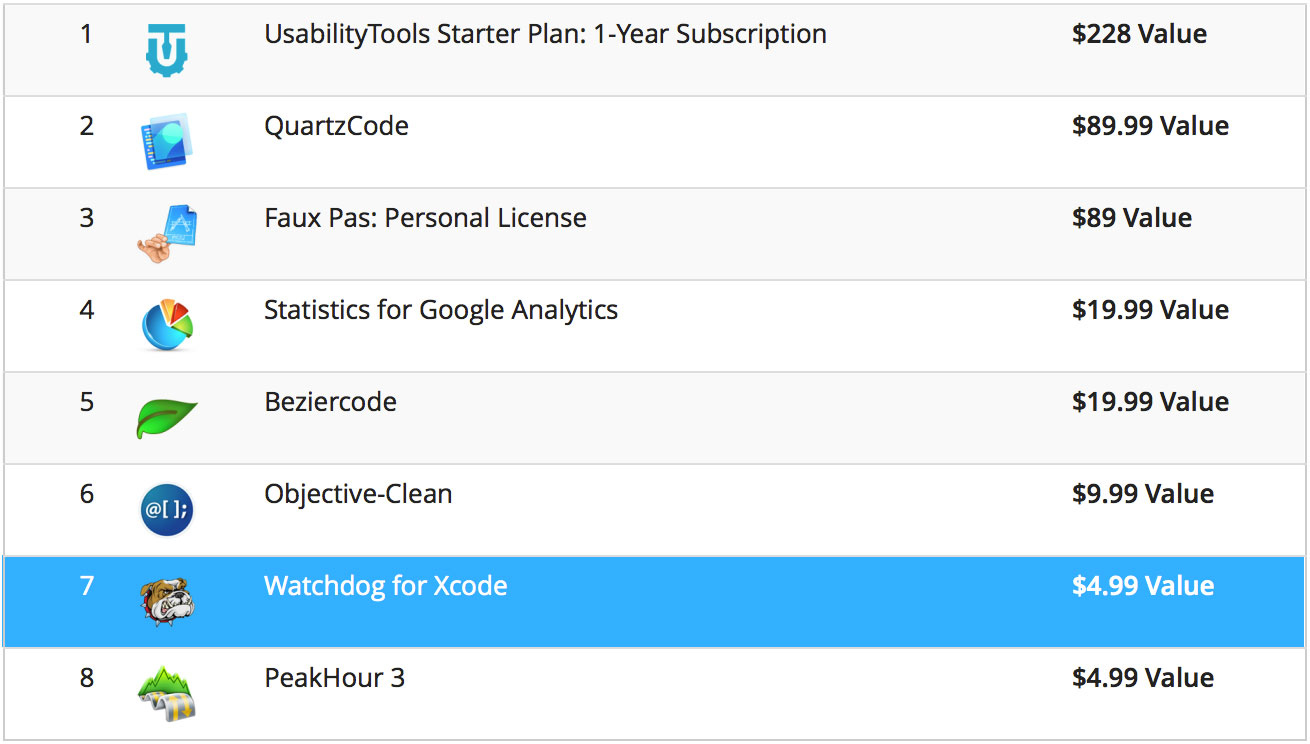 That's a pretty great line-up of dev tools. StackSocial takes pride in curating the best in creative tech products so rest assured that this bundle will deliver. If you already have the MAS version of Watchdog and would benefit from the non-sandboxed version we'll be issuing an update soon that will let you convert your MAS license to a non-MAS license. You can learn more about Watchdog for Xcode here and grab the bundle here.

The new Apple TV is finally here and we have some exciting apps in the pipeline that we are working on and can't wait to share them with you. In the meantime, I wanted to share some mockups I created during the development process. This set includes flat vectors of the new Apple TV and remote created with Adobe Illustrator. Includes .ai, .eps, and transparent .png files. Also included is a bonus game controller vector. Download and use these for applications, web sites, presentations, or any kind of project. They are free to use for personal and/or commercial projects. Remember to spread the love and share these freebies with your friends. Enjoy!

This week I had the pleasure of joining Christina Warren and Simone de Rochefort for some accelerated geek conversation on their podcast Rocket. On this episode you can hear us talk more about Rudoku, dig into the new iMacs, discuss Twitter’s latest reshuffling, and mourn the end of America’s Next Top Model.

I was filling in for regular co-host Brianna Wu who was busy speaking at the Grace Hopper Celebration of Women in Computing in Houston. It’s the world’s largest gathering of women in tech and an all-around awesome event so be sure check it out. 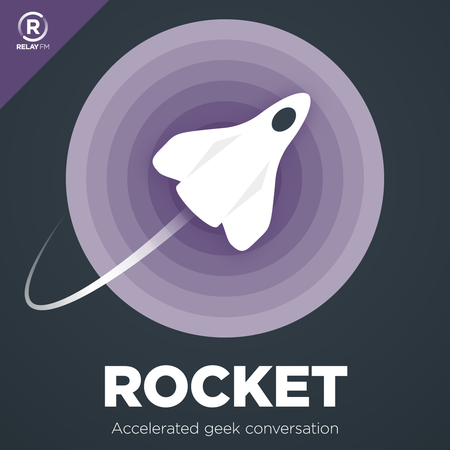